Amul is now the 9th Largest Dairy Company in the World.

AMUL is now the 9th Largest and the fastest growing dairy organization in the world.

AMUL ranks 9th among the Large milk processors of the world. Just seven years back (in 2011), Amul was ranked 18th in the list of top global dairy organizations. The Growth rate of Amul is one of the Fastest in the Dairy Industry.

It is important to note that its Branded consumer products have registered a growth of 14% over previous year with products such as Cheese, Butter, Milk Beverages, Paneer, Cream, Buttermilk and Dahi having grown at 20-40%.

The provisional unduplicated group turnover of Amul brand has crossed Rs. 41,000 Crores ($5.8 billion) which is 10% higher than last year.

The 18 member Unions of Amul Federation with farmer member strength of more than 36 lakhs across 18,700 villages of Gujarat are procuring on an average 211 Lakhs litres of milk per day which is 20% higher than last year.

Amul Federation passes on 80-85% of consumer rupee back to milk producer members thus encouraging them to produce more milk. 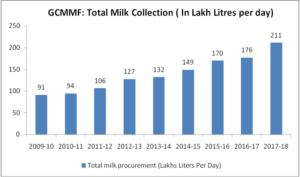 Also Read: Amul Dairy aims to be among the Largest Dairy organization in the World.