Amul Dairy aims to be among the Largest Dairy organization in the World.

Gujarat Co-operative Milk Marketing Federation Ltd., (GCMMF) which markets the popular Amul brand of milk and dairy products has registered a turnover of Rs. 33,150 Crores ($4.7 Billion) for the financial year 2018- 19 which ended on 31st March 2019.

The sales turnover achieved by GCMMF is 13% higher than the previous financial year.

In fact, the group turnover of GCMMF and its constituent member unions, representing unduplicated turnover of all products sold under Amul brand is exceeding Rs. 45,000 crores or US$ 6.5 Billion.

Turnover of GCMMF: (In Crores) 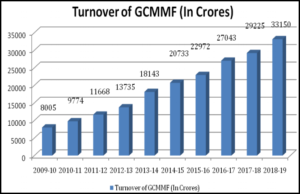 Total Milk Procurement by GCMMF : (In Lakhs Liters per Day) 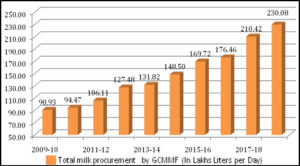 Several brand new dairy plants have already been commissioned in different parts of India in the last couple of years. These include, two eight lakh litres per day capacity plants – one at Taloja, Navi Mumbai.

And the other at Navapura near Ahmedabad– and another two lakh litres per day capacity plants in Junagadh and Porbandar. We are also expanding our milk powder manufacturing capacity at Himmatnagar.

Company’s new chocolate factory has boosted the production capacity to 1,300 MTs per month, enabling GCMMF to launch several new and unique flavoured chocolates which have been attracting huge interest from chocolate lovers and being received favourably by consumers.

He also added that GCMMF have introduced as many as 102 new products in the last four years, with 48 products being revealed in just the last two years, exceeding the target of launching two new products every month.

Also Read : Amul is now the 9th Largest Dairy Company in the World.