What is Small Finance Bank

Despite various measures taken by the Government to increase financial penetration in India, a significant percentage of India’s population does not have access to basic financial services.

In 2013, the RBI constituted a committee that recommended differential licensing in the form of payment bank and SFB. Accordingly, on November 27, 2014, the RBI
released guidelines for a new class of banking entity, ‘small finance banks’, to cater to the diverse needs of the low income group.

Further, on September 16, 2015, the RBI awarded SFB licenses to 10 players on account of the Government’s focus towards financial inclusion and inclusive banking. Out of the 10 SFBs, there were eight microfinance players, one local area bank and one NBFC.

The objective of SFB’s is to extend banking services to the underserved and unserved population through savings instruments, and providing credit to small business units, small and marginal farmers, micro and small industries, and other unorganized sector.

What are the RBI Regulations for Small Finance Banks?

What is the Growth driver for Small Finance Banks?

The key growth drivers for SFB include the size of the India market in terms of financially unserved and underserved households and a business model that offers
sustainable credit to the poor at affordable rates.

Do Small Finance Banks have Strong IT Infrastructure?

To support the high volume business and to meet security and compliance requirements of different regulatory authorities, SFBs require strong and secure systems at the core. Further, various SFBs have tied up with the large IT companies in order to improve their IT infrastructure.

The increase in use of technology is expected to also enable such players in expanding their reach to under penetrated population and areas at a lower operating cost.

The operations of SFBs is technologically driven in order to reduce the cost of operations and also ensure faster reach to the untapped market.

Who are the TOP Players in the Small Finance Banking Industry w.r.t AUM. 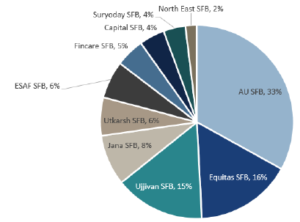 The ability to accept deposits through CASA (Current Account Savings Account) and other retail deposits would provide SFBs cheap source of funding which would help them in competing with the NBFCs.

Further, with the low cost of funds, SFBs would aim to expand their product portfolio and provide competitive rates in the market.

In addition, with further expansion of SFBs in the underserved regions, the deposit base is expected to further increase and will help in expanding their asset side portfolio. Accordingly, SFBs will hold an advantage over NBFCs. 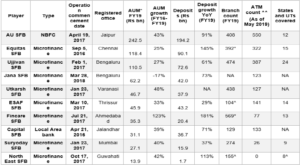 To Whom does Small Finance Banks primarily Cater to?

SFB’s aim to cater to the low-income segment and have an opportunity to offer them with various products and services.

Further, deeper penetration of SFBs into semi-urban and rural areas will help them to cater unserved and underserved rural population and with competitive advantage in relation to cost of funds in comparison with the local NBFCs.

SFBs will be considered as the most suitable choice among mass population having requirements of lower ticket size loans. In addition, the knowledge of local areas enables SFBs to understand the needs of the customers better.