Company was originally incorporated in the year 2009, at Mumbai and promoted by Mr. Hitesh Doshi and Mr. Viren Doshi. On May 8, 2010,Company was taken over by the corporate promoter M/s. Madhav Power Private Limited (“MPPL”) with the intention of entering into solar power projects in the state of Gujarat.

Company is investing in Special Purpose Vehicle (“SPV”) associate and subsidiaries companies which are engaged in solar power generation activities. Company is also planning to commence the Engineering, Procurement and Construction (“EPC”) in solar project.

Some details about Company’s Past.

On May 21, 2010, Gujarat Urja Vikas Nigam Limited (“GUVNL”) had awarded Waa Solar Ltd the work of setting up of Solar Photovoltaic Grid Interactive Power Plant of 10MW capacity at village Nayka, Taluka-Sami, District Patan, to produce the Electric Energy and for sale of entire electrical energy, so produced, for commercial purpose from such project to GUVNL for a tenure of 25 years. GUVNL has entered into Power Purchase Agreement (“PPA”) dated May 21, 2010.

On January 30, 2013, Airport Authority of India, Rajiv Gandhi Bhavan, New-Delhi, had entered into PPA with Waa Solar Ltd for setting up solar power plant of 100 KWP at Raja Bhoj Airport, Bhopal on Built, Own and Operate (“BOO”) basis for a tenure of 25 years. 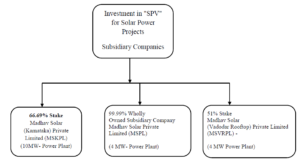 Company has formed following SPV for the implementation of Solar Power Project in Karnataka, Punjab and Gujarat:

Company has floated MSKPL on September 3, 2013 and having stake of 66.69%. MSKPL has entered into PPA on February 25, 2014 with Chamundeshwari Electricity supply corporation Ltd and has awarded Waa Solar Ltd the work for setting up of Solar Photovoltaic Grid Interactive Power Plant of 10MW capacity at Sira Taluk, Tumur District.

Company have floated wholly owned subsidiary company MSPL on August 13, 2013 and having stake of 99.99%.

MSPL had entered into PPA on December 27, 2013 for a period of 25 years with Punjab State Power Corporation Limited and has awarded Waa Solar Ltd the work for setting up of Solar Photovoltaic Grid Interactive Power Plant of 4MW capacity at village Buha, Tehsil Budhlada, Dist. Mansa.

Company has floated subsidiary company MSVRPL on March 13, 2014 and having stake of 51%. MSVRPL has entered into PPA on June 17, 2014 with Madhya Gujarat Vij company Limited and has awarded Waa Solar Ltd the work for setting up of Solar Photovoltaic Grid Interactive Power Plant of 4 to 6 MW capacity at Vadoadara.

We believe that there are no listed Companies in India which are purely engaged in Solar Power Generation by setting up Solar PV power project.

Financials of the Company: (Consolidated)