Report on ATM Industry in India.

The following table sets forth the number of transactions on the basis of volume (in million):

The number of ATMs in India has been increasing, which can be attributable to the ease in setting up ATMs under the managed services and brown-label management models.

The following table sets forth the number of ATMs under the current ATM management models, as of March 31, 2018:

The bank contracts the deployment of its ATMs to a vendor or service provider. This is also known as complete outsourcing or end-to-end deployment of ATMs. Upon winning and entering into a contract with the bank, the service provider takes the responsibility of searching for suitable ATM sites, surveying for the same and ultimately leasing the sites. A typical ATM site is a minimum of a 100 square feet area with rent ranging between Rs.9,000 to Rs.25,000.

An ATM machine is priced between Rs.2,40,000 to Rs.2,85,000 and is the major cost component while setting up an ATM. Further, the vendor looks at the décor or building works of the ATM site and electricity supply, and sets up a very small aperture terminal (VSAT) terminal and lease lines.

The bank is responsible for providing cash and its brand name on the ATM along with the upgradation of the ATM machines. The service provider is paid per transaction or through a monthly fee within the brown-label or completely outsourced model (transactions done by the bank‘s customers on its ATMs). The major services for which the bank pays the service providers are cash management, network monitoring, security services and housekeeping.

In the managed services model, a bank leases the site and owns the required equipment. However, the banks contract the servicing of the ATM to a third-party service provider or vendor. After outsourcing services, the bank is only involved in providing cash for the ATM or providing cash settlements. The bank pays the vendor for its services either through a fixed fee per month, or on a pay per use or per transaction fee.

ATMs under managed services generally follow the fixed fee model wherein the bank pays a fixed amount for every service availed by the bank.

Within the white-label ATM scheme, non-bank entities can own and operate ATMs under their own brand. As of March 31, 2018, 15,195 white-label ATMs are operating in India.

The following table sets forth the market share of major players in ATM supply/deployment market on the basis of revenues in million (Rs.), in the financial year 2018:

NCR Corporation, a global leader in omni-channel solutions, announced that it has completed the sale of a significant portion of its assets and related customer contracts in respect of its outsourced ATM business in Kerala, Bihar, Jharkhand and Lakshadweep to Electronic Payment & Services Pvt. Ltd. (EPS), a leading payment system company headquartered in Mumbai.

Innovations in the ATM Industry:

With the Advancement in technology Various leading global banks, in order to enhance customer’s experience, are evolving their ATMs.Few such enhancements are mentioned below:

Many global payment leaders have introduced technologies, which allow the customer to carry out transaction without a card, through their smartphones. With growing use of smartphones, many mobile manufacturers are ensuring that their devices are near field communication (NFC)-enabled, which allows the smartphone to communicate with devices in certain proximity.

SunTrust Bank plans to introduce this technology at their ATMs so that customers can use their NFC-enabled smartphones to access the ATM. Wells Fargo has rolled out a similar technology, which will link its digital wallet Android Pay and plans to further add wallets such as Apple Pay and Samsung Pay,  which enables customers to carryout transactions without using their cards.

As the global industry has adopted these measures, Indian companies are also expected to adopted these technologies, which enable the customer to access ATMs without the card and PIN.

DCB Bank has launched its Aadhaar-based ATMs, which enables customers to use their unique Aadhaar number and Aadhaar fingerprint (biometric) instead of the debit card and PIN to dispense cash from the bank account.

DCB Bank ATMs are not only enabled to facilitate such cardless transactions, but also several money transfer transactions.

ICICI bank, Bank of India and Axis bank have initiated money transfer transactions via their ATMs. These facilities enable customers to transfer funds without logging in to their net banking facilities.

ATMs in urban areas consume substantial amount of electricity. However, in rural areas the Government is coming up with ATMs run on solar energy, which will enable the banks to provide services in those areas where there is shortage of electricity.

The following chart sets forth India‘s payment gateway market segmentation by type of payment modes on the basis of transaction volume in percentage (%), for the financial year 2018: 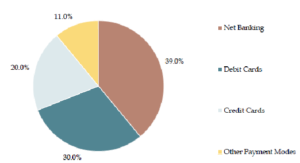