RVNL is a wholly owned government company, a Miniratna (Category – I) Schedule ‘A’ Central Public Sector Enterprise, incorporated by the Ministry of Railways (“MoR”)

During the financial year ending March 31, 2018, we have completed a total of 885.50 rkm of project length which included 315.20 rkm of doubling and 425 rkm of railway electrification.

Various activities undertaken by the Company:

Doubling of Rail Track: Doubling involves the provision of additional lines by way of doubling the existing routes to enable the Indian Railways to ease out traffic constraints of single line or construction of 3rd/4th line to increase the charted capacity.

Company is a significant contributor to the doubling projects and has been contributing to approximately one third of the total doubling being completed / commissioned on Indian Railways for the last three years. order book value for doubling was Rs.27,721 cr.

Others railway Works: This includes but is not limited to construction of traffic facilities, railway safety works (building of sub-ways in lieu of crossings), other electrification works, training works, surveys, construction of bridges including rail over bridges, etc. order book value for other projects was Rs.1626 cr. 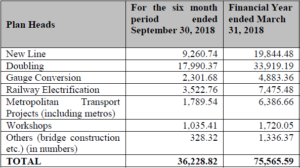 Competitors for the Company:

Financials of the Company: (Consolidated)

Also Read:  How to know whether IPO is a Good IPO or a bad IPO?