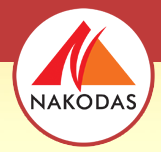 Nakodas (Incorporated in 2013) is engaged in manufacturing of tutti fruity (Diced Chelory) also called as “Papaya Preserve” and canned fruit cubes which comes under the category of bakery products.

Company is also engaged in processing of almonds which are imported from California and other Middel east countries by the traders in Maharashtra. They are also engaged in trading of sesame seeds, clove, cutpeel murabba, karonda, daalchini and toor daal.

Out of the total revenue generated from manufacturing of tutti Fruity i.e. 5.53 crores, 61.36% is generated from Exporting to London, Malaysia, Dubai, Saudi Arab and 38.64% is from the domestic sale.

Some Background about the Nakoda Group.

Since 1998, Navkar Processors the sole proprietorship of Pravinkumar Choudhary exports its products to Middle East & European Countries. Subsequently Nakoda group took over the business of Navkar Processors from July 18, 2016.

Who are Company’s Customers?

They supply their canned fruit cubes to Industrial users, bakeries and confectionery units. Company’s customers include food manufacturers and food and flavour
processors. 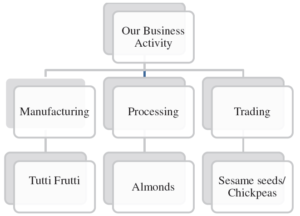 We believe that there are no listed Companies in India which are engaged in manufacturing of tutti fruity and processing of almonds. Further there are no listed entities which are focused exclusively on the segment in which Nakoda Group of Industries Ltd operate. Hence we cannot make any Comparison.

Subscription Details: (will be Updated)