ESAF Small Finance Bank is one of the leading small finance banks in terms of yield on advances, AUM growth rate and share of retail deposits.

Company’s business model focuses on the principles of responsible banking, providing customer-centric products and services through the extensive application of technology.

As at November 30, 2019, company had operations in 16 states and one union territory, 403 Branches, 38 Ultra-Small Branches and has served over 3.73 million customers.

Details of Small Finance banks at the end of Fiscal 2019: 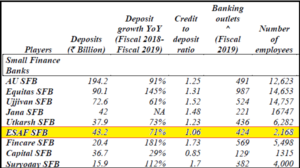 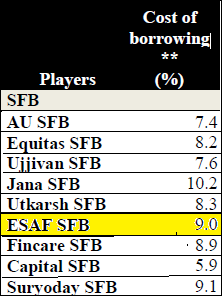 Deep understanding of the microfinance segment, which has enabled company to grow the business outside of Kerala, company’s home state. 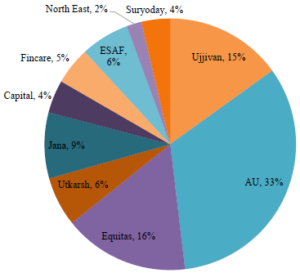 Future Growth Strategies for the Company:

Expand the Geographic presence and penetrate deeper into existing geographies.