DMart was conceived by value investor Mr. Radhakishan Damani in the year 2000, operating a single store in Maharasthra. With a mission to be the lowest priced retailer in its area of operation, DMart has grown steadily over the years and operates 155 stores in 11 States and 1 Union Territory of India.

By the late 1990s, Company’s founder, Mr. Radhakishan Damani, was already established as one of the more successful and well-known value investors in the Indian equity markets. Through his investing style, he had developed a very keen understanding of the Indian consumer sector and its psyche.

He was anxious to start a business beyond investing, which would enable him to test his hypothesis about the Indian consumer. After a couple of years of introspection and research, he decided to start a grocery retail chain, focusing primarily on the value segment.

Thus DMart retail chain, was conceived by Mr. Damani in the year 2000 and DMart took eight years to start its first ten stores.

Avenue Supermarts Limited is an emerging national supermarket chain, with a strong focus on value-retailing.

DMart follows a cluster-based expansion approach. Company’s focus is on deepening their penetration in the areas where they are already present, before expanding to newer regions.

By implementing this strategy, Company added 24 stores in FY 2017-18, thus ending the year with 155 stores spread across 11 states and 1 union territory.

The below Image Shows how DMart has a consistently growing presence across India: 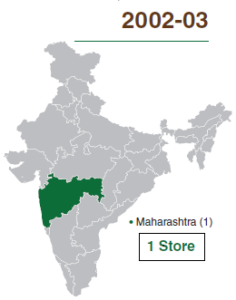 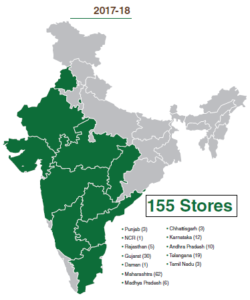 As of 31st March, 2018, company had 24 distribution centres and 6 packing centres in Maharashtra, Gujarat, Telangana and Karnataka. 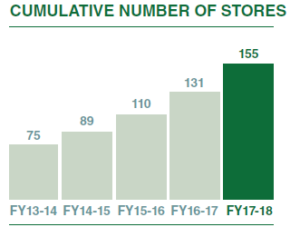 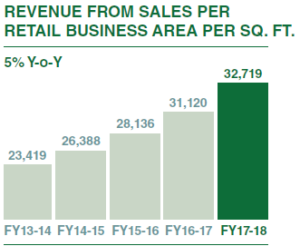 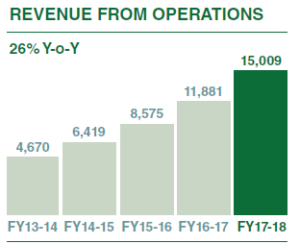 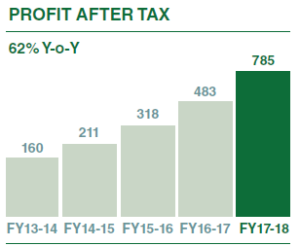 During the financial year 2017-18, we have stayed our course with steady growth in revenues, operating profit and net profit. We aspire to remain competitive in a challenging and an ever-changing retail environment, while maintaining our value proposition to customers.

On 6th March, 2018, CRISIL revised its outlook on the long-term bank facilities and non-convertible debentures of the Company to “Positive” from “Stable” and re-affirmed its ratings at “CRISIL AA”.

Further, CRISIL re-affirmed its rating on the Company’s commercial paper programme at ‘CRISIL A1+’.

“CARE A1+” (CARE A one plus) is reaffirmed by CARE for the Company’s commercial paper / short-term debt programme.