Brookfield REIT is India’s only institutionally managed public commercial real estate vehicle.Sponsored by an affiliate of Brookfield Asset Management (“BAM”), one of the world’s largest alternative asset managers with approximately US$575 billion in assets under management (AUM).

Company’s Initial Portfolio comprises 14.0 msf, with rights to acquire a further 8.3 msf and rights of first offer on an additional 6.7 msf, both currently owned by members of the Brookfield Group. 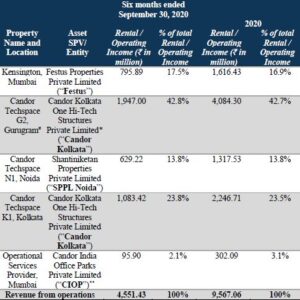 • Company is witnessing a recovery in demand for office space across the Initial Portfolio. In addition to having re-leased 0.5 msf of leases that expired during the six months ended September 30, 2020, we have received interest and are engaged in discussions with respect to 1.6 msf.

• During the months of October, November and December 2020, company collected 99%, 98% and 96% of Gross Contracted Rentals, respectively.

Rental rates for office space and space leased for bank branches, ATMs, retail stores and telecom towers in the office parks are generally fixed with periodic rental escalations for the tenure of the leases, while those for food and beverage outlets are generally charged on a revenue sharing basis.

Proceeds of the Issue:

• Partial or full pre-payment or scheduled repayment of the existing indebtedness of Asset SPVs.